YouPix Community, Better your odds of Getting your Movie Made!

NoFilmSchool.com posted this article about YouPix,  a community of film makers that share resources. Another way of connecting with others in the film making biz.

Sometimes it can feel like the chances of your screenplay being bought and made, or having a shot at getting paid to direct a film is 1 in a million. YouPix is a contest/community that may help up those odds — to 1 in a thousand to be more accurate. This new platform is twofold: It’s an online filmmaking community where members can upload their scripts and films, talk in forums, and follow each other’s activity (like Facebook.) It’s also a screenwriting/directing contest that awards winners up to $500,000 to make their film. More details after the jump.
YouPix was launched in late-May of this year. Founders and filmmakers Mathew Davis and Talieh Safadi set out  to offer opportunities for screenwriters and directors to both share their work with fellow members of the site, as well as compete for the chance to make their films. 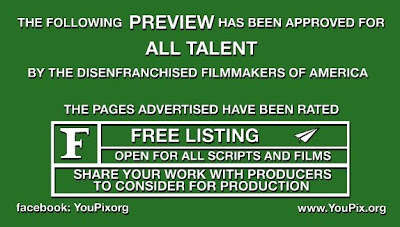 Posted by Binary Recording Studio at 7:43 AM