Aliasing / moire is a problem with DSLRs because the cameras were designed primarily to shoot still photos at much higher resolution than their video mode allows. So, in order to drop from 5616 x 3744 in still mode to 1920 x 1080, the camera skips lines which causes this effect.
I was on a shoot a few months ago and moire was picked up on the actors tweed shirt, ( a rainbow vibrating spiral)  I didn’t notice it while shooting but in post it showed up on a few clips
Now what I have been using when I think there may be a problem like this is a filter built by  Mosaic Engineering.  I gave them a call to ask them about any cropping issues etc...  they said there could be a problem with some wide angle lens.  I have used it with a 28mm lens with no problems.
At Binary we are very impressed with this filter and would recommend it for scenes that don’t allow alot of setup time to avoid the evil moire.
If you unclear of what moire effect looks like there are plenty of video examples online, check it out.
The filter made by Mosaic Engineering 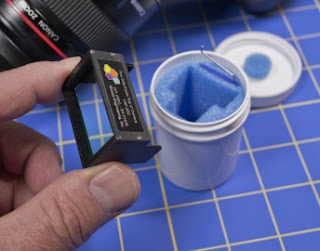